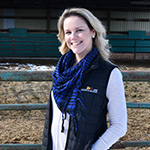 In order to improve animal welfare, the owners of Neilson Cattle Development (“Neilson”) have approached the TACLP at Olds College to conduct an applied research project investigating the effects of different weaning methods on overall herd efficiency and welfare. Neilson had previously incorporated a low-stress weaning method (nose-flap weaning) into their operations as an alternative to the traditional abrupt weaning method. However, they faced several challenges, including calves losing nose-flaps during the nursing interruption, allowing calves to return suckling, as well as observing no clear benefits on growth rates compared to the traditional abrupt weaning. The TACLP team noticed that Neilson’s current facilities were suitable to adopt the fenceline weaning method. Thus, in 2020, the effects of nose-flap and fenceline weaning methods on growth performance, health, and welfare were tested against the traditional abrupt weaning. In 2021, the adoption of a novel handling procedure on newborn calves known as tactile stimulation (gently hand rubbing 1-d old calves in order to mimic mothering behavior in the form of licking on its offspring) was tested in combination (or not) with either nose-flap, fenceline or abrupt weaning method. In this section, Dr. Gellatly will provide information based on the results obtained from both studies as well as an overview – based on the scientific literature – of the implications of those management procedures previously mentioned on beef cattle performance, health, and welfare.

Dr. Désirée Gellatly is the Research Scientist for the TACLP at Olds College. Dr. Gellatly directs and supports the scientific activities of all livestock research projects conducted by the TACLP. She is responsible for the financial and authoritative security of livestock research projects as well as preparation of research proposals/contracts and submissions, project budgeting, development and implementation of research trials, supervision of research staff, and client communications. Dr. Gellatly completed her M.Sc. and Ph.D. in Animal Science at São Paulo State University in Brazil with a focus on the assessment of cattle temperament and its relationship with feeding behaviour, feed efficiency, growth, and reproductive performance. She also carries two post-doctorates from Agriculture and Agri-Food of Canada managing projects related to beef cattle and sheep behaviour and welfare.