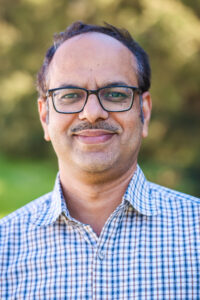 Opportunities and challenges in plant pathology

Alberta is the largest producer of barley in Canada, with 80% of the produce used for feed purposes and 20% towards malt. Different abiotic and biotic stresses limit barley yield. Among biotic stresses, barley scald, net blotch, and stripe rust affect above ground green foliage limiting food assimilation, and Fusarium head blight affects grain quality due to production of DON toxin by the causal organism. The pathology team at the Field Crop Development Center of the Olds College works collaboratively with the breeding team in developing disease resistant varieties of feed and forage barley and triticale. This working collaboration involves screening of breeding material for disease resistance potential at different field locations across western Canada, and identification of new sources of resistance which breeders can incorporate into new elite barley varieties for sustainable production with less reliance on the use of agrochemicals. Other important pathology activities include disease surveillance which involves monitoring the impact of existing and new diseases, and the study of pathogen population dynamics to make informed decisions regarding the development of improved barley and triticale germplasm better suited for the growers of Alberta.

Dr. Sajid Rehman is a plant pathologist with the FCDC Olds College. Dr. Sajid grew up in Pakistan and completed his B.Sc. (Hons.) agriculture degree from the University of Agriculture, Faisalabad. He got a NUFFIC (Dutch organisation for internationalisation in education) scholarship in 2000 to pursue his M.Sc. Crop Science course with specialization in IPM from Wageningen University, The Netherlands. He obtained his PhD in plant pathology from Wageningen University in 2008. His PhD research was focused on the parasitism genes from potato cyst nematode. Then, he pursued his research on Verticillium wilt disease of tomato and potato from 2008-2010. From 2010-2012, his research was focused on powdery mildew and leaf rust diseases of barley. Later, he started working as a cereal pathologist at the International Center for Agriculture Research in the Dry Areas (ICARDA) based in Rabat, Morocco from 2013-19. From Nov. 2019 to Jan. 2022, he worked as a plant pathologist at the plant health lab of Perennia, Nova Scotia. Throughout his research career, his main emphasis has been on key questions; how pathogens cause disease on their host plants, how plants defend themselves, and how can we design crops plants with durable resistance.